We are VERY excited to announce that we are once again finalists for the ERT Awards Brown Goods Supplier of the Year! 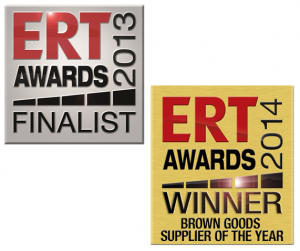 The ERT Awards, now in their eighth year, reward retailers and manufacturers for excellence in the electrical retailing industry.

They are organised by ERT magazine and this year the magazine celebrates its 125th birthday, a huge milestone that is being marked with a brand new look, format and editorial focus.

Following on from our finalist status in 2013 we were the winners last year beating Samsung and Roberts to bring home the coveted award.

This year we are finalists alongside Roberts and Panasonic; the awards will take place at the Grand Connaught Rooms in London on Monday 19th October.